Following mastectomy, one of the techniques performed to reconstruct a breast is called Tissue Expander Implant Reconstruction. A tissue expander is a balloon that is surgically placed after the mastectomy or placed later in time.

This procedure can be done in one stage (direct to implant reconstruction or placing the implant during the same mastectomy surgery) or in two stages (tissue expander is placed first, followed by implant placement at a later time). In general, reconstruction with implants following either route has the fewest scars, and is the least invasive of all the breast reconstruction surgery options. 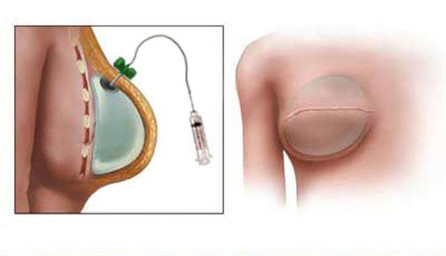 This procedure usually entails one day in the hospital. During follow up office appointments, the expander is gradually filled with salt water until you have reached your desired size. If chemotherapy and/or radiation therapy is necessary, once these therapies are completed, the expander is removed and the permanent implant placed. This takes about one hour and is done on an outpatient basis, meaning, you can go home right after the procedure. After healing from the second surgery, a nipple can be created with skin taken locally from the reconstructed breast. A tattoo is added in office to recreate the areola, done by our professional tattoo artist who specializes in creating areolas. Reconstruction with implants can also be accomplished in a single stage. This reduces the number of surgeries needed to complete the reconstruction, but offers less flexibility with size, and entails slightly more risk. Watch the video for additional information about breast reconstruction with tissue expanders.

See Before & After Photos

What timeline can I expect my reconstruction to follow?

The duration of your reconstruction varies, depending on two variables. First and most importantly, it depends upon your post-operative treatment course (radiation, chemotherapy, etc.). Any additional surgery following your mastectomy and tissue expander will not be performed until this is completed and you have healed. Secondly, the length also depends upon the number of expansions necessary to get you to your desired size. Typically, it is best to wait at least three months from your initial mastectomy before any additional surgery occurs.
Learn more about implant reconstruction, latissimus flap reconstruction, and abdominal tissue reconstruction.

How large will I be after the first stage tissue expander reconstruction?

We add fluid to the expander at the time of surgery that takes up the excess skin without putting any tension on the skin. This usually results in a breast slightly smaller than you were prior to surgery.

How many expansions will I need? How often can they be done?

Can expansions be done during my other treatments?

Expansions can be done during chemotherapy, but not during radiation therapy.

When can I start expanding?

Expansions typically begin 2-4 weeks following your mastectomy, given that your skin has healed as expected.

Most women do not have sensation in the area where the expansion occurs. It is possible to feel pressure, but rare that it is painful.

Is it okay to swim with an expander in place?

Yes, you may swim with an expander or implant 3 weeks following your surgery (or when the incision is healed).

How do I know what size is best?

We will continue to expand until you reach a size that you are comfortable with. We usually recommend trying on different types of clothes to determine which size is best for you. Ideally, we overexpand one time past your desired size in preparation for your second stage surgery